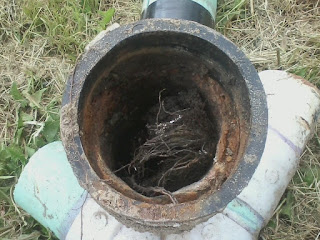 I have been wanting to rip out my main sewer line since we moved into the house.  I had a bad feeling about it.  I started excavating it back in February.  When I dug it up it was all pieced in and crooked and ugly.  This shit nest was all up and down the old cast iron.  I don't know how the waste was getting through.  There was cast iron which the trees had gotten into, PVC, which someone had pieced in years ago, and clay.  I put in new ABS as far back as my excavation went. 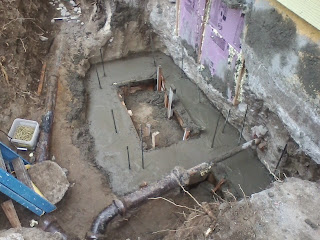 This is what the old sewer line looked like before I poured the window well.  Notice that stupid concrete patch job under the blue ladder.  Somewhere by the bucket of screws you can see where the cast iron line was flaking away.  I put duct tape over it until I could rip it out and replace it later. 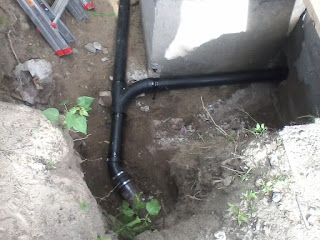 This shows the connection I made at my existing clay sewer line.  The branch off to the right is for my new bathroom.  I couldn't replace the sewer line until I formed and poured the window well.  The object of this project was to dig up the sewer line and make a window well all in one excavation.  I excavated it all by hand. 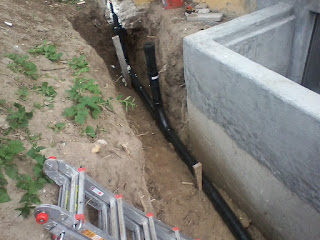 I sloped my line 1/4" per foot.  I drove those wood stakes in to keep the line straight until I get it back-filled.  I will have to extend my clean-out above grade but I ran out of 4" ABS.  The clean out is moved enough away from the house because I am going to redo the stupid foundation you see in the next picture.  By the time I re-do the foundation the clean out will be right on the edge of the house. 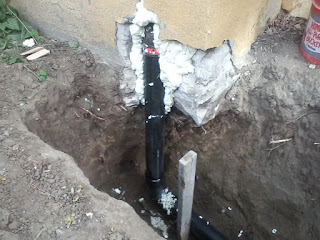 This is the stupid foundation I was writing about above.  Whatever idiots made this foundation didn't even extend it below grade.  Furthermore; they put the sewer riser right inside the foundation.  There was about 3/4" of concrete I flaked away from the outside of the riser in order to tie in the new line.  When I re-do the foundation and extend the bathroom my riser will be on the inside of the foundation wall; like it is supposed to be.  I'm glad I caught this sewer line problem before the sewage started backing up inside the house!

I wouldn't have the heart to move away the old steel line and replace my sewage line all by hand. Once I saw the mess I'm sure I would have called a plumber right away. It's amazing to see how great your new lines look! Your next project should be fixing that concrete patch job in your foundation for sure. I wish you the best of luck! http://www.southwestplumbing.biz/services/sewer