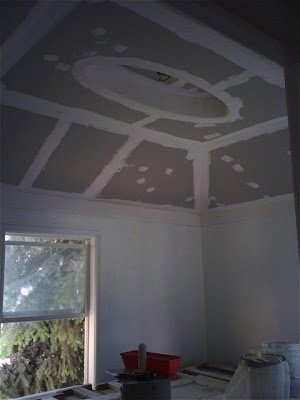 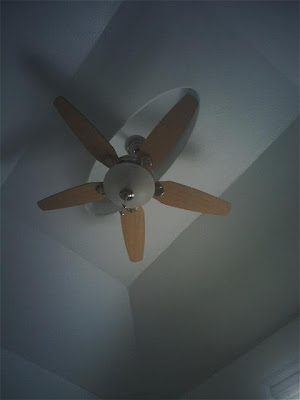 I have been wanting to rip out the ceiling in this bedroom for a long time. So I finally did. I replaced the flat, sagging, 8' garbage ceiling with this tray ceiling. The idiots who built my house tried to span 10' with a single 2 x 4 ceiling joist with no supports from the rafters. Thus the sagging. The idiot who "remodeled" the house only put new sheet rock on that old glittery pop-corn ceiling garbage. So I ripped all that trash out in one fail swoop. I had a blizzard of blown in insulation to deal with as I ripped it down. But me and Robert got it all cleaned up and put back in the attic.
After that it was rafter cutting- mayhem 2010. For a trucker Robert caught on pretty quick to the skill saw and he can still boast all his fingers. Then the sheet rock and texture kept me busy for a few nights afterward. I had Zoo Zoo paint everything because I fell ill due to seasonal allergies. Now that room feels bigger.
Posted by Jonathan at 7:22 PM

What a beautiful finished product your tray ceiling with the fan is. Way to go - another goal accomplished.