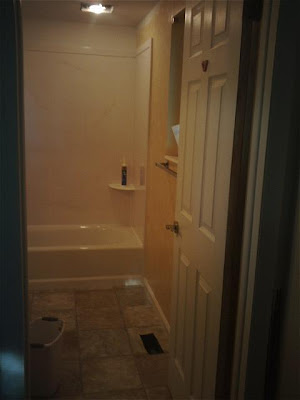 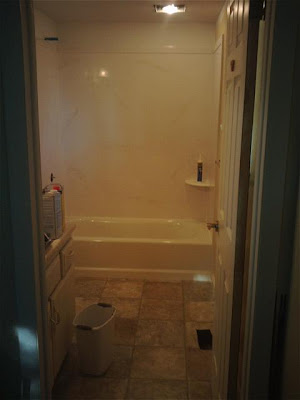 Jared called me over to finish his master bathroom. When they bought the house there was a doorway going from the master bathroom into the kitchen. In the corner of the bathroom there was an old tile shower. That was kind of weird so they wanted to rip out the shower and make a wall where the doorway was. So we ripped out the door and the old shower and filled in the wall there. The old tile shower had bad grout so water was leaking down into the basement. They installed a new tub there. I sheet rocked around it. Then I put cultured marble around the tub and put new vinyl flooring down. I put waterproof base around the floor and siliconed it in. Now there is a more watertight seal to the entire bathroom.

The pictures don't show it but I put the toilet back in and put the shower valve and tub spout and shower spout it. I put the exhaust fan and light in as well.