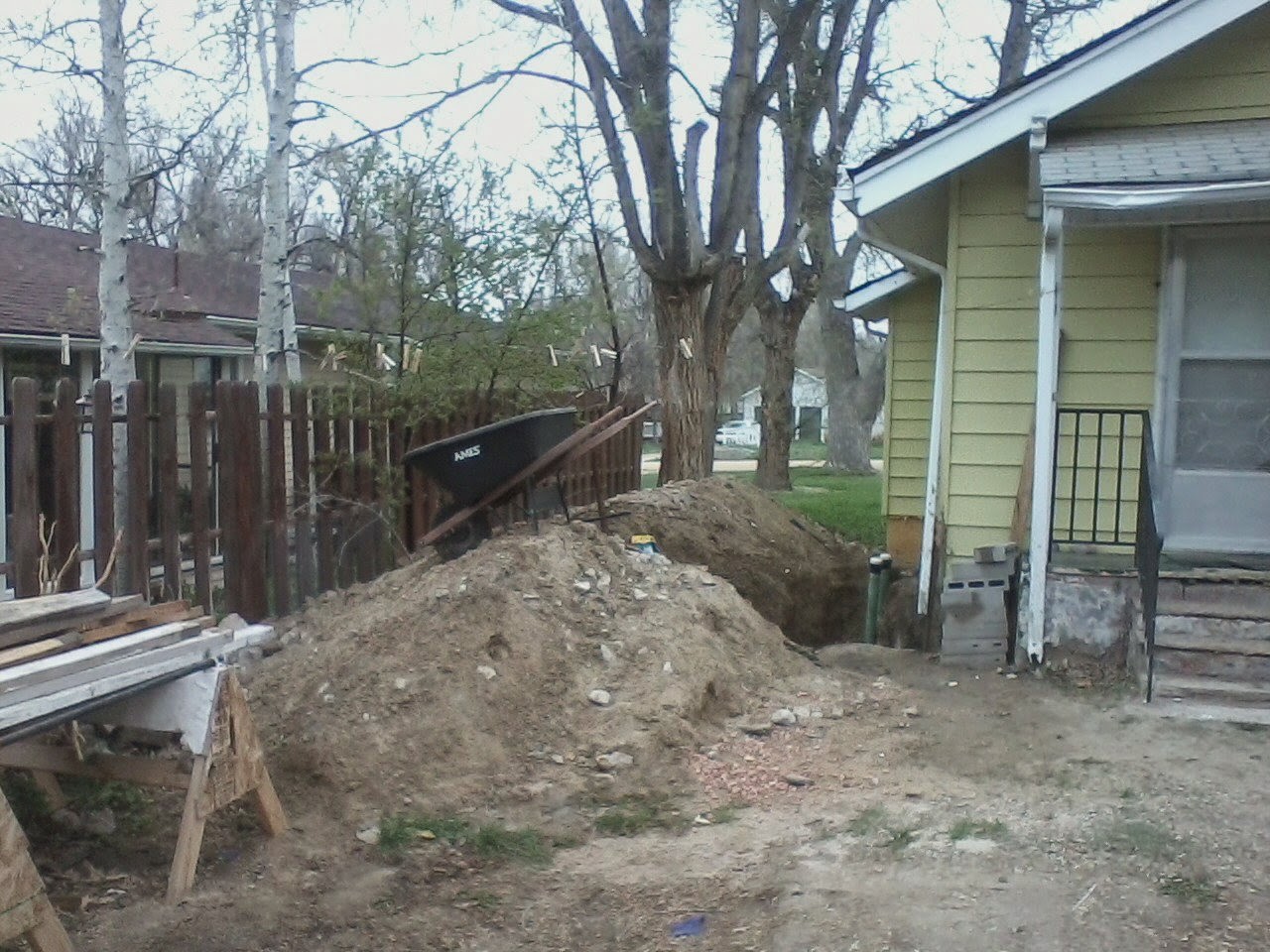 I have been excavating to expose my sewer line.  I am adding another bathroom in the house and I need to tie the bathroom drain lines into the sewer line.  I have plenty of free time and a scanty paycheck as a school teacher so I excavate by hand.  I am also putting in a new window in my foundation wall so I made my excavation wide enough to accommodate the form work for a concrete window well and footings.  The dilapidated porch and door to the right of the photo is coming out when I frame in my new bathroom 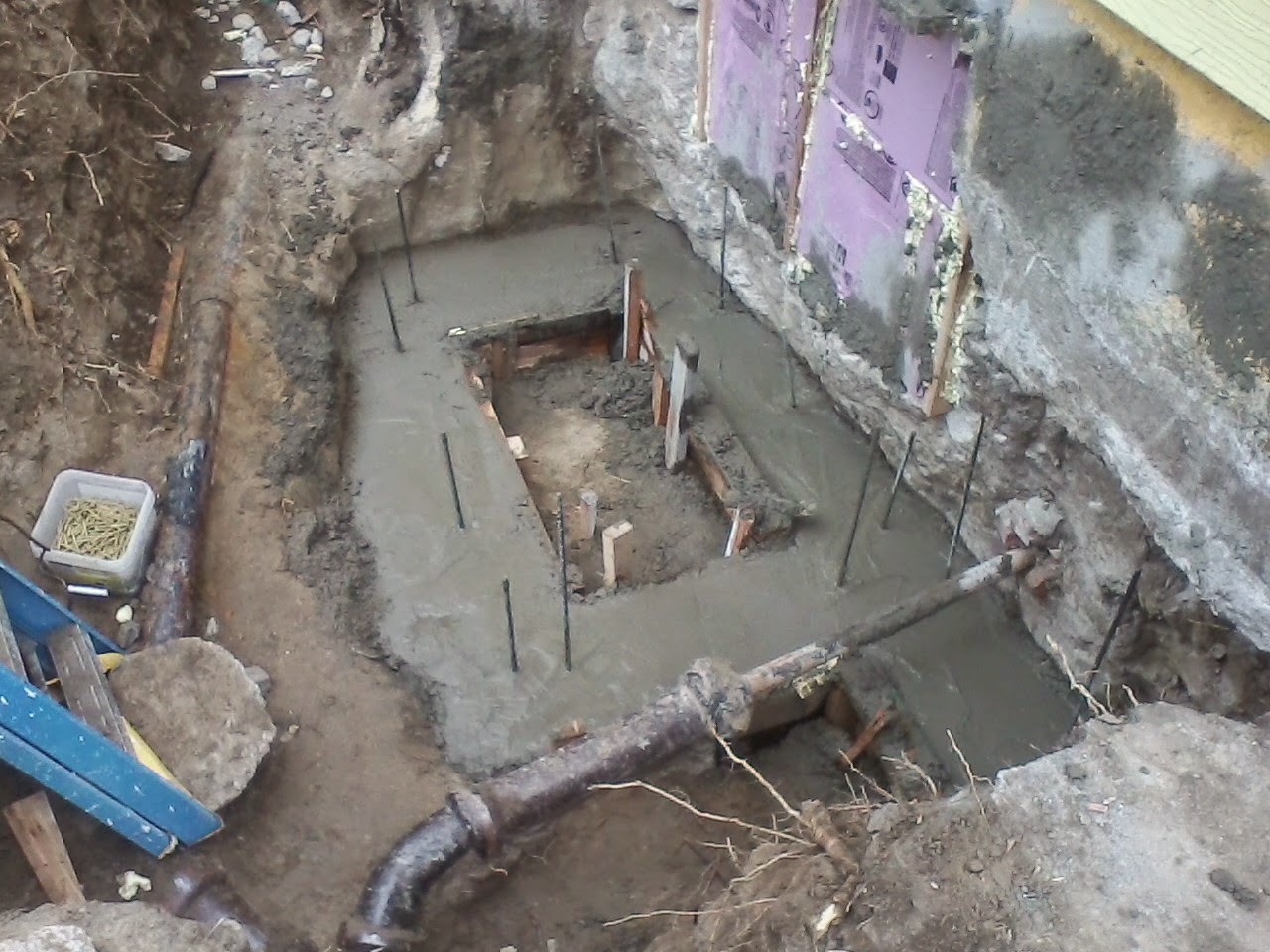 I formed the footings for my new window well.  You can see the foundation to the right of the photo hanging off in mid air.  This is due to the fact that the original foundation was poured without footings and not below the frost line-that is bad.  Previous owners have gone back and dug the basement out and poured concrete walls to contain the soil under the foundations.  I have added a block wall around the perimeter of the basement on the inside of the house as another line of defense against water entering the basement.  I am going to continue this chunk of missing foundation down to my footers- like it should have been done in the beginning.  I mixed all this concrete by hand because it is too expensive to call a concrete truck out here in the middle of no where, Colorado.  I mixed all this concrete (probably 2 cubic yards) by hand one Sunday. 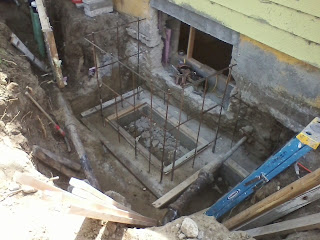 I put tied re-bar to the re-bars sticking out of the footings.  Now all I have to do is build my form and pour the concrete for my window well. 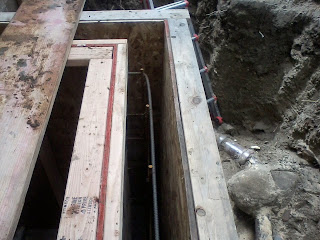 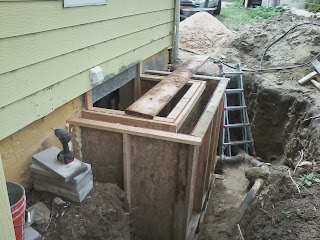 I have the window well formed.  Now I am ready for concrete.  My neighbor let me use his concrete mixer so the 3 tons of concrete I mixed was manageable.  I hired a kid from one of my high school classes to come and mix the concrete while I poured it in the forms with a wheelbarrow.  We started mixing at about 1 pm.  We were almost done at about 8 pm and the FORMS STARTED BLOWING OUT!  I  had to pull them back together on top with bar clamps and put additional bracing on.  I didn't get to bed until 11 pm that night.  There will be some bow in the window well but most of it will be buried anyway.  I got lucky that all 3 tons of concrete didn't end up flooding my hole and burying my sewer line!  Next time I will have to brace the forms better. 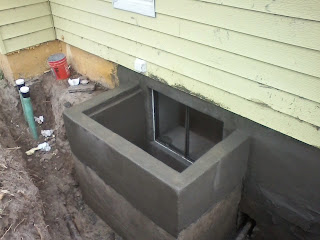 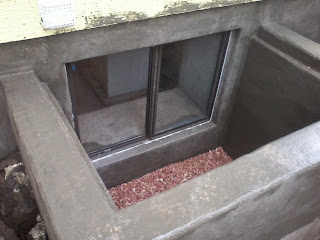 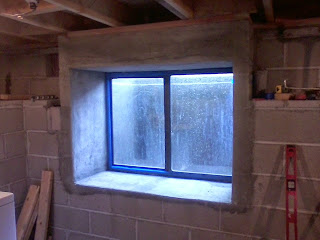 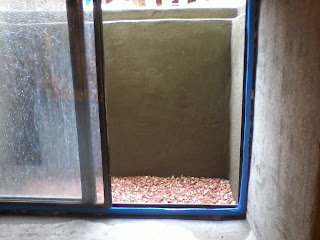 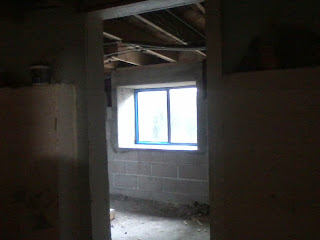 I got the forms stripped.  Since I used OSB for the forms, the impressions of the wood flakes were left in my concrete walls.  Also, I laid up cinder blocks under the new concrete header to hold it in place.  I didn't like the look of cinder blocks next to poured concrete so I plastered everything.  I just used a mix of concrete sand, Portland cement, and masonry lime.  It worked really well and I am pleased with the new window. Now I have a source of daylight in my basement.  If the electricity goes out I can still have a little bit of light down there.  Now I can vent the basement whenever I want.  I also have another point of egress in case my house blows over with a tornado and we can't make it up the main stairs.  The only think I have left to do is back fill the window well, put in an egress ladder, and a metal grate where I left the indentation in the window well wall.  The nice thing about this project is that it has given me the confidence to form and pour an entire basement foundation on a new house if I ever build one.

Your new window is looking good! It's great that you know how to install it, and you didn't have the need to hire other people to do it for you. Good job! And I hope to see your new bathroom too, soon! :)

The job that you are describing goes well beyond that of a do-it-yourself project. I am blown away by what you have managed to accomplish. Foundation work is a specialty in construction. Plus you added a window. I stand amazed at what a regular person can do when the motivation is strong enough.