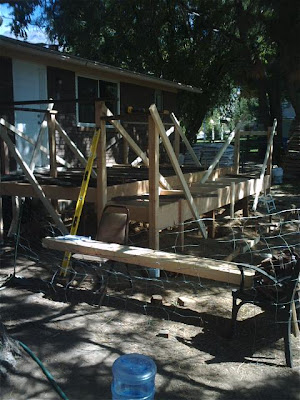 Jared called me over to fix his deck. The one that was there when they moved in was garbage. It looked like a 7th grader built it. Part of it was sitting down in the dirt rotting. It wasn't bolted to the house and it wasn't level. So we tore it apart and reused some of the lumber. We built the new one "from the top down". Instead of trying to guess at where to dig the holes and where to set the posts we built the frame on the ground then bolted it to the house then leveled it. It is held in place by temporary stakes. Then we hung the posts down into the holes temporarily bracing them plumb. Then we poured the concrete in the holes. When the concrete cures we will take off all the temporary braces and stakes. Most dummies and novices just go dig holes wherever, dump concrete in them and shove posts in. How are you supposed to get things plumb and level and square and parallel like that?
I will put up more pictures of the deck when I finish. So for all the millions and millions of readers that see this blog post you are just going to have to wait a few weeks until I update this post.