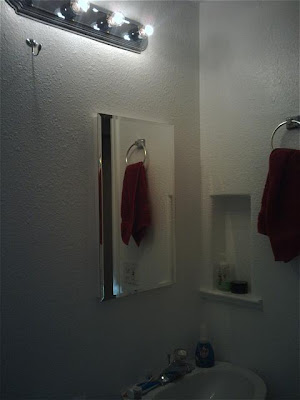 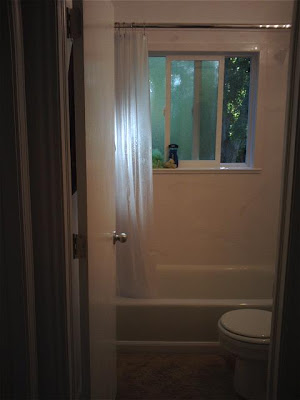 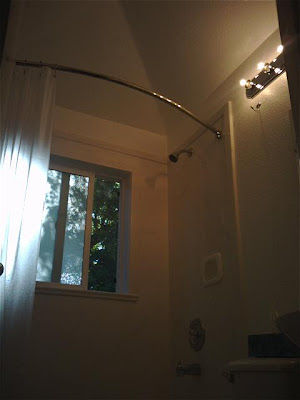 My bathroom had a mold infestation because the idiot I bought the house from did a horrible job on the finish plumbing. The shut off valve for the toilet was leaking and also the stop for the sink was put on loosely so whenever the water drained down the sink it would leak down the wall. I ripped out the black moldy base board. When my roommate left to Washington D C for the summer I ripped all that moldy crap completely out. I stripped the bathroom down to the studs. I ripped off the sub floor and exposed the joists. The joists were in decent shape but the whole floor was out of level. So I leveled the joists and replaced the sub floor. I replaced the toilet drain. I put in a brand new tub. I had to reconfigure the plumbing to accommodate the piece of crap vinyl shower that was in there before. Thank heavens for Shark Bite fittings. I put in a brand new 36 by 36 window in the bathroom so now the air can flow thru. I ripped down the old sagging crap 1/4 inch gypsum board ceiling and put in a tray cieling. Since the bathroom is so small having a higher ceiling makes it feel more roomy. I accidentally sliced thru an electrical wire with my sawzall so I had to run a new wire. I raised up the light in the bathroom. I had to re install the fart fan into the new ceiling. I secured the switch box to the wall better so the switches aren't falling out of the wall anymore. I ripped off the old crappy 2 foot wide door and replaced it with a door that is 4 inches wider. I put in cultured marble all the way around the tub. The shower head is now higher. I recessed 2 medicine cabinets in the wall. I made a little soap cove right next to the sink. I replaced the cartridge in the shower plumbing so now the faucet doesn't leak into the tub anymore. I made sure that hot water comes out of the hot water side now instead of the cold water side. I put the sink back in and this time made sure that the stop was tightened and wow it doesn't leak now. I put vinyl tiles down on the floor. I put plastic base board down and siliconed it in so water won't leak behind it. If you are tired from just reading this imagine that I did all this crap on weekends and after framing for at least 8 hours a day. My thanks to Chippy for financing this project for me. I spent all my money on wicked sick mean power tools so he came thru for me when I had to spend thousands of dollars on building materials. I can't complain about money because I saved heaps of it by doing all this myself. And it only took me about 5 weeks.

The bathroom pictures you took turned out very nice. I'm so glad we re-did the bathroom--it's now a million times better.
And I was flattered that you mentioned me financing the project even though you paid me off relatively fast with a bonus of a small financing fee that I charged.

I think your comments are hilarious and it is no surprise that you did all that after an 8 hour day.

You do so well on your projects. Even so we like you more. Mom